Working of the Microprocessor :

Parts of microprocessor - I :

Bus Unit - Connects the internal units of the microprocessor like the control unit and prefetch unit.

Decode Unit - Decodes the various instructions sent to the microprocessor

Depends on number of instructions it processes

Number of transistors built into it

Multitasking means the processor time is divided into no. of tasks

Most effective when used with application software

Steps followed by the microprocessor to interface with a device :

Checks the status of the device.

Requests the device for transferring data.

The device sends the data request to the microprocessor.

The microprocessor sends the required data to the device.

Speed at which CPU communicates with RAM

BSB interfaces between L1 cache on processor with L2 cache

BSB is faster than FSB

Packaging of microprocessor - I :

Staggered Pin Grid Array (SPGA) – Pins are staggered rather than arranged in standard rows and columns. Allows to move the pins closer and decrease the size of chip

Types of microprocessor - I :

Based on the number of instructions built into it, they can be classified as : 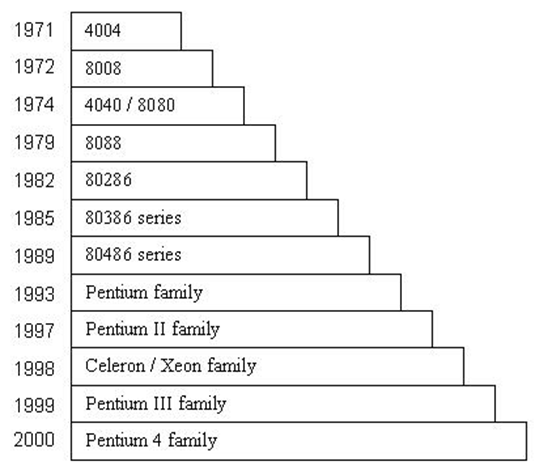 Designed to work with everyday applications

First chip from the fifth generation of microprocessors

Available on a daughter card that has L2 cache

Has a 14-stage data pipeline for executing instructions

Has a unique Processor Serial Number (PSN) embedded in the chip

Has a 10-stage data pipeline for executing instructions

Has a 20-stage data pipeline for executing instructions

Also available in the following editions :

Uses Slot A to connect the AMD microprocessor to the motherboard

Each of the cores has their own cache, can process independently and provide better performance

To make use of dual core technology, the process must use multiple threads

A component that is used to lower the temperature of an electronic device which absorbs heat from the electronic device and distributes it to surrounding environment. Two types of heat sinks available namely :

Passive Heat Sink – The passive heat sink is a metal plate with fins attached to surface of the processor. The plane of the heat sink absorbs the heat of processor and fins streams the air to cool it.

Active Heat Sink – An active heat sink is an expansion of passive heat sink with a fan attached on top of the plane metal surface. This facilitates direct cooling of the processor.

Overclocking increases the speed of the microprocessor

Must check documentation of the microprocessor and motherboard before overclocking