Integrated motherboards – Have all peripheral device slots, input output ports, serial and parallel ports mounted on the board. Saves space and cheaper as compared to non-integrated motherboards. Disadvantage is that if an individual component of the motherboard fails, the whole board may need to be replaced

Non-Integrated motherboards – Have RAM slots integrated on the board. All the I/O ports such as serial and parallel port connectors, other controllers such as hard drive and floppy disk drives controllers are attached to the system using expansion boards

Laptop Motherboards – Have very advanced features, as compared to the desktop motherboards

Refers to motherboards physical shape, layout and positioning of components on it

Determines the type of system case it will fit into

Products sold by these companies are of different form factors

Components of a Motherboard :

On Board Disk Drive Connectors :

Ports are located at the back side of the system

Motherboard has PCI slots where you can connect PCI cards.

Extend the capacity of the existing motherboard

AGP slot is used to attach a graphic card

Card with capabilities of modem and audio

AMR slot is smaller than the standard PCI slot

Now used only for modems

PCI Extended (PCI-X) is a standard designed jointly by HP, IBM, and Compaq

Increase the performance of high-bandwidth devices, such as Gigabit Ethernet and Fibre Channel

Extends the capabilities of PCI bus

Data Transmission Rate of each lane is 250MBps

CPU frequency is set as a multiple of FSB

Small pins that enable you to configure motherboard settings

Performs different functions when it is shorted and when it is left open, without the shunt

Motherboard manual is a necessity when you deal with jumpers

Motherboards may have jumpers to set the color or mono monitor type, to set the cache memory type and size, to set the processor type, system recovery option and to discharge the CMOS RAM battery

Maximum number of slots depend on the motherboard

Interface that connects CPU with motherboard

Sockets are used with particular type of processor

Sockets already installed on board

Saves settings and time when computer is switched off

Mostly made up of Lithium

Built into Read Only Memory (ROM) of computer

Provides the basic input output functionality of the system

Smaller, slower speed devices are controlled by this chip such as floppy drive, serial ports, PS/2 mouse, some keyboard functions and parallel ports

Regulates voltage supplied over a line

Installed on motherboard and regulates voltage that is needed by CPU

It is a DC to DC converter

Senses voltage needed by processors from the processor itself

Paths through which data is transferred between devices and components 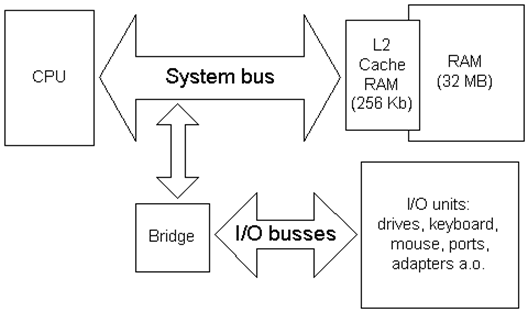 In new systems, the system bus is also called the Front Side Bus (FSB)

Modern chipset consists of the Northbridge and the Southbridge

Factors for selecting a Motherboard :

Form Factor – Defines size and shape of board. While choosing a motherboard, you need to consider the different types of slots you require for your system. Choose a case that is large enough to fit the motherboard of the correct form factor

CPU Support – Should support different types of microprocessor and sockets. Before purchasing a motherboard, you need to consider the various processors that it supports. In the future, if you need to upgrade your processor, you may not have to change the whole motherboard

Memory slots – Should have more number of slots. To support new technology software user can upgrade the system in the future

SATA support – Allows higher transfer rates of data between hard disk and motherboard and should have SATA controller on it.

Number of Ports – Should have more number of USB and other ports to connect different devices to the system. Depending on the type of device to be attached to the system and the port that is required, the board should be purchased.