Because TCP/IP is so central to working with the Internet and intranets, it’s essential for us to understand it in detail.

TCP/IP and the DoD Model :

The DoD model is basically a condensed version of the OSI model, it’s composed of four, instead of seven, layers : 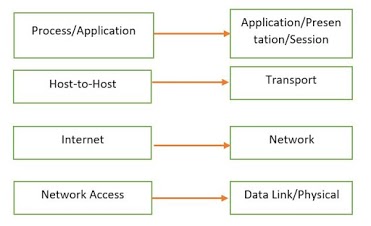 We are going to study protocols come under Process/Application Layer

These emulated terminals are of the text mode type and can execute refined procedures such as displaying menus that give users the opportunity to choose options and access the applications on the duped server. Users begin a Telnet session by running the Telnet client software and then logging into the Telnet server.

Telnet offers no security or encryption and is replaced by Secure Shell (SSH).

File Transfer Protocol (FTP) is the protocol that actually lets you transfer fi1es across a network, and it can accomplish this between any two machines that are using it. FTP is used by applications. As a program, it’s employed by users to perform file tasks by hand. FTP also allows for access to both directories and files and can accomplish certain types of directory operations, such as relocating files into different directories.

The problem with FTP is that all data is sent in clear text, just as with Telnet. If you need to make sure your FTP transfers are secure, then you have to use SFTP.

Secure File Transfer Protocol SFTP is used when you need to transfer files over an encrypted connection. It uses an SSH session, which encrypts the connection, and SSH uses port 22, hence the port 22 for SFTP.

It’s used just as FTP is — for transferring files between computers on an IP network, such as the Internet.

Trivial File Transfer Protocol (TFTP) is the stripped-down, stock version of FTP, but it’s the protocol of choice if you know exactly what you want and where to find it plus it’s easy to use, and it’s fast, too! It doesn’t give you the abundance of functions that FTP does though. TFTP has no directory-browsing abilities; it can do nothing but send and receive files. This compact little protocol also used in the data department, sending much smaller blocks of data than FTP, and there’s no authentication as with FTP, so it’s insecure.

Simple Mail Transfer Protocol (SMTP), answering our ubiquitous call to email, uses a spooled, or queued, method of mail delivery. Once a message has been sent to a destination, the message is spooled to a device usually a disk. The server software at the destination posts a vigil, regularly checking the queue for messages. When it detects them, it proceeds to deliver them to their destination. SMTP is used to send mail; POP3 is used to receive mail.

Post Office Protocol (POP) gives us a storage facility for incoming mail, and the latest version is called POP3. Basically, how this protocol works is when a client device connects to a POP3 server, messages addressed to that client are released for downloading.

It lets you peek at the message header or download just a part of a message. You can choose to store messages on the email server hierarchically and link to documents and user groups, too. IMAP even gives you search commands to use to hunt for messages based on their subject, header, or content. It has some serious authentication features it actually supports the Kerberos authentication scheme that MIT developed. IMAP4 is the current version.

Remote Desktop Protocol (RDP) is a proprietary protocol developed by Microsoft. It allows you to connect to another computer and run programs. RDP operates somewhat like Telnet, except instead of getting a command-line prompt as you do with Telnet, you get the actual graphical user interface (GUI) of the remote computer. Clients exist for most versions of Windows, and Macs now come with a preinstalled RDP client.

They both use X.509 certificates and asymmetric cryptography to authenticate to the host they are communicating with and to exchange a key. This key is then used to encrypt data flowing between the hosts. This allows for data/message confidentiality, message integrity, and message authentication.

Media Gateway Control Protocol (MG CP) is a standard protocol for handling the signaling and session management needed during a multimedia conference.

MGCP can be used to set up, maintain, and terminate calls between multiple endpoints.