Computers connected together in peer-to-peer networks do not have any central, or special, authority they’re all peers, meaning that when it comes to authority, they’re all equals.

Meaning of this is the computers coexisting in a peer-to-peer network can be client machines that access resources and server machines and provide them to other computers. This actually works pretty well as long as there isn’t huge number of users on the network, if each user backs things up locally, and if your network doesn’t require much security.

If your network is running Windows, Mac, or UNIX in a local LAN workgroup, you have a peer-to-peer network. Just remember one thing peer to-peer networks definitely present security-oriented challenges, for example, backing up company data can be very difficult. 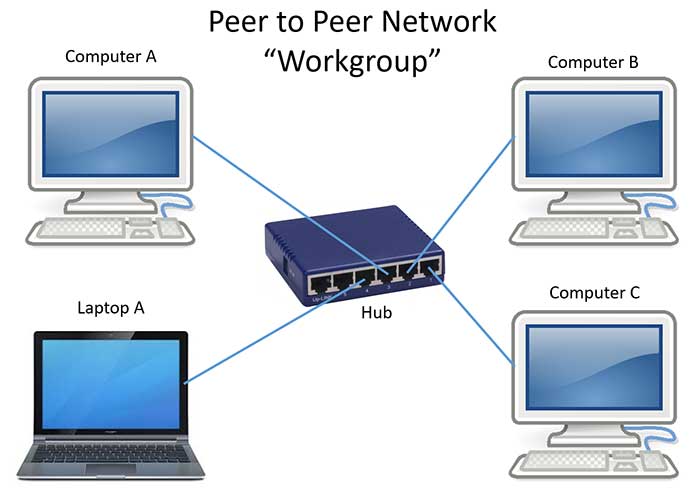 It should be clear by now that peer-to-peer networks aren’t all sunshine, backing up all your critical data may be tough, but it’s vital! Haven’t all of us forgotten where we’ve put an important file? And then there’s that glaring security issue to tangle with. Because security is not centrally governed, each and every user has to remember and maintain a list of users and passwords on each and every machine. Worse, some of those all-important passwords for the same users change on different machines even for accessing different resources.

Client-server networks are pretty much the polar opposite of peer-to-peer networks because in them, a single server uses a network operating system for managing the Whole network. Here’s how it works: A client machine’s request for a resource goes to the main server, which responds by handling security and directing the client to the desired resource. This happens instead of the request going directly to the machine with the desired resource, which has some serious advantages. First, because the network is much better organized and doesn’t depend on users remembering where needed resources are, it’s a whole lot easier to find the files you need because everything is stored in one spot—on that special server. Your security also gets a lot tighter because all usernames and passwords are on that specific server, which is never ever used as a workstation. You even gain scalability client-server networks can have legions of workstations on them. And surprisingly, with all those demands, the network’s performance is actually optimized nice!

Above image shows a client-server network with a server that has a data base of access rights, user accounts, and passwords.

Many of today’s networks are hopefully a healthy blend of peer-to-peer and client-server architectures, with carefully specified servers that permit the simultaneous sharing of resources from devices running workstation operating systems. Even though the supporting machines can’t handle as many inbound connections at a time, they still run the server service reasonably well. And if this type of mixed environment is designed well, most networks benefit greatly by having the capacity to take advantage of the positive aspects of both worlds.