The Network allows computers to connect and communicate with different computers via any medium. LAN, MAN and WAN are the three major types of the network designed to operate over the area they cover. There are some similarities and dissimilarities between them. One of the major differences is the geographical area they cover, i.e. LAN covers the smallest area; MAN covers an area larger than LAN and WAN comprises the largest of all.

Just as the name implies, a local area network (LAN) is usually restricted to spanning a particular geographic location such as an office building, a single department within a corporate office, or even a home office.

Back in the day, you couldn’t put more than 30 workstations on a LAN, and you had to cope with strict limitations on how far those machines could actually be from each other. Because of technological advances, all that’s changed now, and we’re not nearly as restricted in regard to both a LAN’s size and the distance a LAN can span. Even so, it’s still best to split a big LAN into smaller logical zones known as workgroups to make administration easier.

In a typical business environment, it’s a good idea to arrange your LAN’s workgroups along department divisions; for instance, you would create a workgroup for Accounting, another one for Sales, and maybe another for Marketing—you get the idea. Following image shows two separate LANS, each as its own workgroup. 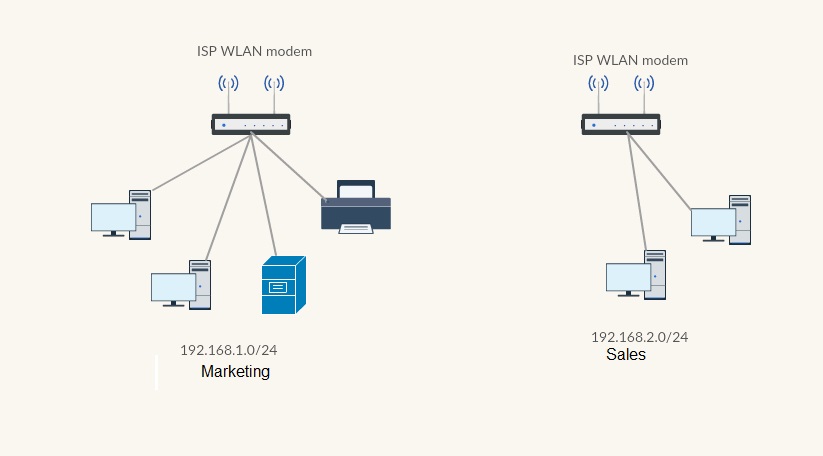 First, don’t stress about the devices labelled hub and switch—these are just connectivity devices that allow hosts to physically connect to resources on an LAN.

Notice that there’s a Marketing workgroup and a Sales workgroup. These are LANs in their most basic form. Any device that connects to the Marketing LAN can access the resources of the Marketing LAN—in this case, the servers and printer.

There are two problems with this :

This is a typical network issue that’s easily resolved by using a cool device called a router to connect the two LANs, as shown in below image 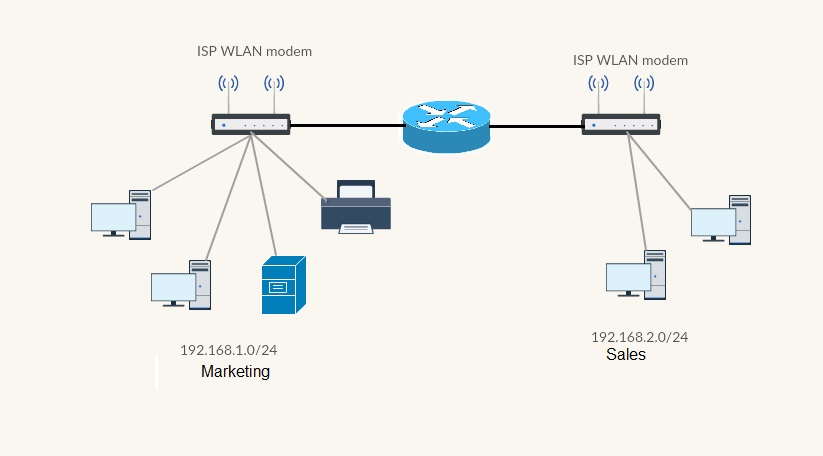 Problem solved! Even though you can use routers for more than just connecting LANs, the router shown in above image is a great solution because the host computers from the Sales LAN can get to the resources (server data and printers) of the Marketing LAN,and vice versa.

Here’s a list of some of the important ways that WANs are different from LANs:

Routers are the devices that make this possible. Each connection into a router is a different logical network. Router enable our LANs to access WAN resources.

The Internet is a prime example of what’s known as a distributed WAN an internetwork that’s made up of a lot of interconnected computers located in a lot of different places. There’s another kind of WAN, referred to as centralized, that’s composed of a main, centrally located computer or location that remote computers and devices can connect to.

Multiprotocol Label Switching (MPLS), MPLS has become one of the most innovative and flexible networking technologies on the market, and has some key advantages over other WAN technologies:

MPLS is a switching mechanism that forces labels to data and then uses those labels to forward data. 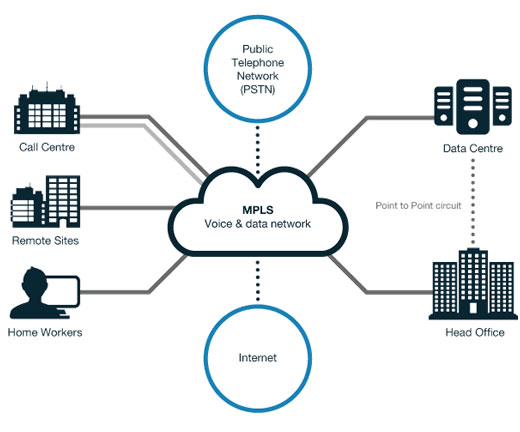 The labels are assigned on the edge of the MPLS network, and forwarding inside the MPLS network (cloud) is done solely based on labels through virtual links instead of physical links. Prioritizing data is a huge advantage; for example, voice data could have priority over basic data based on the labels. And since there are multiple paths for the data to be forwarded through the MPLS cloud, there’s even some redundancy provided as well.