In the very first networks, the computers involved could communicate only with other computers made by the same manufacturer. In the late 1970s, the Open Systems Interconnection (OSI), reference model was created by the International Organization for Standardization (ISO) to break through this barrier.

The OSI model was meant to help vendors create interoperable network devices and software in the form of protocols, or standards, so that different vendors’ networks could become compatible and work together.

The OSI model is the primary architectural model for networks. It describes how data and network information are communicated from an application on one computer through the network media to an application on another computer. The OSI reference model breaks this approach into layers.

The OSI model is hierarchical, and I’d like to point out that the same beneficial characteristics can actually apply to any layered model. Understand that the central purpose of the OSI, and all networking models; is to allow different vendors’ networks to interoperate smoothly.

This short list depicts some of the most important advantages we gain by using the OSI layered model:

One of the greatest functions of the OSI specifications is to assist in data transfer between disparate hosts regardless if they’re Unix-Windows or Mac-based.

But keep in mind that the OSI model isn’t a physical model, it’s a conceptual and, comprehensive yet fluid set of guidelines, which application developers utilize to create and implement applications that run on a network.

The OSI model has seven layers:

The OSI’s seven layers are divided into two groups. The top three layers define the rules of how the applications working within host machines communicate with each other as well as with end users. The bottom four layers define how the actual data is transmitted from end to end.

The Application layer is also responsible for identifying and establishing the availability of the intended communication partner and determining whether sufficient resources for the requested communication exist. 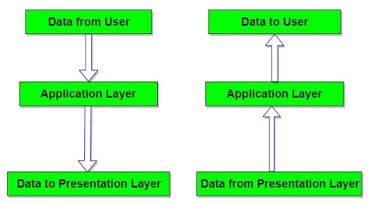 Prime examples are file transfers and email as well as enabling remote access, network-management activities, and client-server processes like printing and information location.

The Session layer rsponsib1e for setting up, managing, and then tearing down session between Presentation layer entities. This layer also provides dialog control between devices, or nodes. It coordinates communication between systems and serves to organize their communication by offering three different modes: simplex, half duplex, and full duplex. The Session layer basically keeps applications data separate from other applications data.

The Transport layer segments and reassembles data into a data stream. Services located in the Transport layer handle data from upper layer applications and unite it onto the same data stream. They provide end-to-end data transport services and can establish a logical connection between the sending host and destination host on an internetwork.

The Transport layer is responsible for providing the mechanisms for multiplexing upper-layer applications, establishing virtual connections, and tearing down virtual circuits. It also hides the many and details of any network dependent information from the higher layers facilitating data transfer.

The Data Link layer provides the physical transmission of the data and handles error notification, network topology, and flow control. This means the Data Link layer ensures that messages are delivered to the proper device on a LAN using hardware (MAC) addresses and translates messages from the Network layer into bits for the Physical layer to transmit.

The Data Link layer formats the message into pieces, each called a data frame, and adds a customized header containing the destination and source hardware address. This added information forms a sort of capsule that surrounds the original message.

The Data Link layer is responsible for the unique identification of each device that resides on a local network.

Media Access Control (MAC) Defines how packets are placed on the media. Contention media access is “first come, first served” access, where everyone shares the same bandwidth hence the name. Line discipline, error notification (not correction), ordered delivery of frames, and optional flow control can also be used at this sublayer.

Logical Link Control (LLC) Responsible for identifying Network layer protocols and then encapsulating them, an LLC header tells the Data Link layer what to do with a packet once a frame is received.

Physical layer sends bits and receives bits. Bits come only in values of 1 or O a Morse code with numerical values. The Physical layer communicates directly with the various types of actual communication media.

The Physical layer specifies the electrical, mechanical, procedural, and functional requirements for activating, maintaining, and deactivating a physical link between end systems.

The Physical layer’s connectors and different physical topologies are defined by the standards, allowing disparate systems to communicate.

The Physical layer specifies the layout of the transmission media, otherwise known as its topology. A physical topology describes the way the cabling is physically laid out. The various physical topologies include Bus, Star, Ring and Mesh.