Just as a geographical map is a type of map that shows the shape of the terrain, the physical topology of a network is also a type of map. It defines the specific characteristics of a network, such as where all the workstations and other devices are located and the precise arrangement of all the physical media such as cables.

Basically, what you want to remember is that a network’s physical topology gives you the lay of the land.

Here’s a list of the topologies you’re most likely to run into these days:

This type of topology is the most basic one of the bunch, and it really does sort of resemble a bus , the bus topology consists of two distinct and terminated ends, with each of its computers connecting to one unbroken cable running its entire length. Back in the day, we used to attach computers to that main cable with wire taps, but this didn’t work all that well so we began using drop cables in their place. If we were dealing with 10Base2 Ethernet, we would slip a “T” into the main cable. 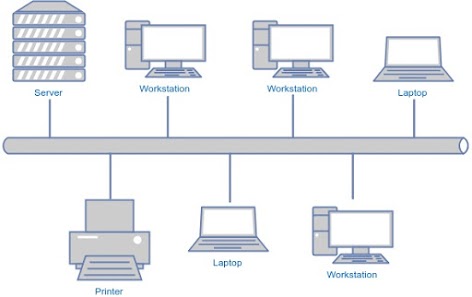 Above image shows what a typical bus network’s physical topology look like.

Even though all the computers on this kind of network see all the data flowing through the cable, only the one computer, which the data is specifically addressed to, actually gets the data.

In star topology’s computers are connected to a central point with their own individual cables or wireless connection. You’ll often find that central device like a hub, a switch, or an access point.

Star topology offers a lot of advantages over bus topology, making it more widely used even though it obviously requires more physical media. One of its best features is that because each computer or network segment is connected to the central device individually, if the cable fails, it only brings down the machine or network segment related to the point of failure. This makes the network much more fault tolerant as well as a lot easier to troubleshoot. Another great thing about a star topology is that it’s a lot more scalable all you have to do if you want to add to it is run a new cable and connect to the machine at the core of the star. 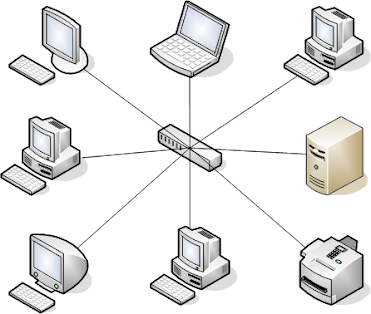 Although it is called a star topology, it also looks a lot like a bike wheel with spokes connecting to the hub in the middle of the wheel and extending outward to connect to the rim. And just as with that bike wheel, it’s the hub device at the center of a star topology network that can give you the most grief if something goes wrong with it. If that central hub happens to fail, down comes the whole network, so it’s a very good thing hubs don’t fail often!

In this type of topology, each computer is directly connected to other computers within the same network. Looking at below image, we can see that the network’s data flows from computer to computer back to the source, with the network’s primary cable forming a ring. The problem is, the ring topology has a lot in common with the bus topology because if you want to add to the network, you have no choice but to break the cable ring, which is likely to bring down the entire network! This is one big reason that ring topology isn’t very popular 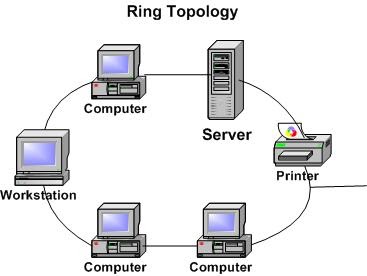 It’s also pricey because you need several cables to connect each computer, it’s really hard to reconfigure, and as you’ve probably guessed, it’s not fault-tolerant.

In this type of topology, you’ll find that there’s a path from every machine to every other one in the network. We won’t find it used in LANs very often, if ever, these days, but we will find a modified version of it known as a hybrid mesh used in a restrained manner on WANs, including the Internet. 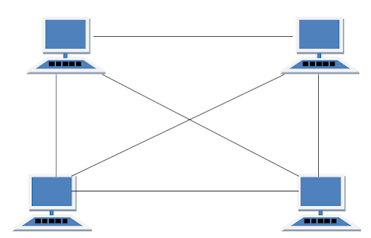 We can clearly see that everything gets more and more complex as both the wiring and the connections multiply. For each n locations or hosts, we end up with connections. This means that in a network consisting of only four computers, we have 4(4-1)/2, or 6 connections. And if that little network grows to, say, a population of 10 computers, we’ll then have a whopping 45 connections to cope with! That’s a huge amount of over head, so only small networks can really use this topology and manage it well. On the bright side, we get a really nice level of fault tolerance, but mesh still isn’t used in corporate LANs anymore because they were so complicated to manage.

As its name implies a point-to-point topology you have a direct Connection between two routers or switches, giving you one communication path. The routers in a point-to-point topology can either be linked by a serial cable, making it a physical network. If they’re located far apart and connected only via a circuit within a Frame Relay or MPLS network, it’s a logical network instead.

A hybrid network is any computer network that uses more than one type of connecting technology or topology. For example, a home network that uses both Wi-Fi and Ethernet cables to connect computers is a hybrid. 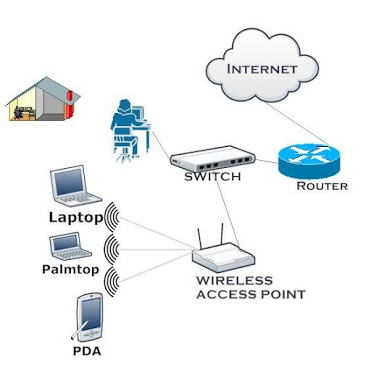