To deal with WAN technology we need to understand the following WAN terms that service provide uses.

CSU/DSU Channel service unit/data service unit (CSU/DSU) is Layer 1 device that’ connects the serial ports on your router the provider’s network and connects directly to the demarcation point (demarc) or location. This devices can be external.

Smart Jack/NIC It is installed between the demarcation location and the CSU/DSU at the customer premises equipment (CPE) location. A smart jack can provide signal conversion by converting codes and protocols into something the customer equipment requires. Plus, the NIU can buffer and/or regenerate the signal to compensate for signal degradation from line transmission.

Demarcation Point A demarc is the precise spot where the service provider’s or local exchange carrier’s responsibility ends and the CPE begins. It’s generally a device in a telecommunications closet owned and installed by the telecommunications company. It’s your responsibility to cable a task called extended demark from this box to the CPE, which is usually a connection to a CSU/DSU or ISDN interface.

Copper Line Drivers/Repeaters A copper line driver or repeater allows for a demarc extension length of up to 5000 feet from the telephone company’s demarc. These can be used to connect equipment across a campus, between floors of a high-rise office building, even between office buildings with underground cable connections.

Local Loop A cable consisting of a pair of copper wires call the local connect the demarc to the closest switching office, known as central office (CO).

Central Office (CO) A phone company building that connects the customer’s network to the provider’ switching network. It’s also good to know that CO is sometimes referred as a point of presence (POP).

Toll Network The toll network is a trunk line inside a WAN provider’s network. This network is, a co11ection of switches and facilities owned by the ISP.

Now we are studying various WAN technologies used in today’s network. Following image shows different types that can be used to connect LAN together. 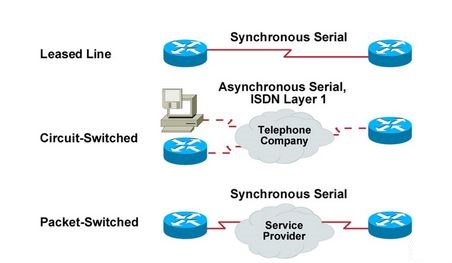 Dedicated (Leased) Lines These are usually referred to as point-to-point or dedicated connections. A dedicated leased line is a pre-established WAN communications path that goes from the CPE through the DCE switch and then over to the CPE of the remote site.

Circuit Switching Circuit switching uses dial-up modems or ISDN and is used for low bandwidth data transfers. No data can transfer before an end to end connection is established. Circuit switching method used in phone call. The big advantages of circuit switching is, you have to pay cost of your use only.

Packet Switching This WAN switching method allows you to share bandwidth with other companies.

LANs use packet switching technology. The source and destination addresses in the packet header guide the network as it moves the packet closer and closer to the destination in the same way the post office takes an addressed letter and keeps it moving incrementally closer to its destination.

WAN protocols are as follows :

ISDN is a digital, point-to-point WAN technology capable of maximum transmission speeds of about 2Mbps, also this technology use 128 kbps speed within a small environment network.

The main thing that makes ISDN different from a regular POTS line is how it utilizes the copper wiring. Instead of carrying an analog voice signal, it carries digital signals. POTS is same as UTP wiring.

Some of the main advantages of ISDN are as fo11os :

ISDN has the following disadvantages :

Frame Relay is a WAN technology in which variab1e1ength packets are transmitted by switching. Packet switching involves breaking messages into chunks at the sending device. Each packet can be sent over any number of routes on its way to its destination. The packets are then reassembled in the correct order at the receiving device. Because they are packet switched and the exact path is unknown.

You should remember couple of thing regarding Frame Relay Technology :

Your thing will be clear after referring following image, why we would use Frame Relay, there are two images before Frame Relay and after Frame Relay. 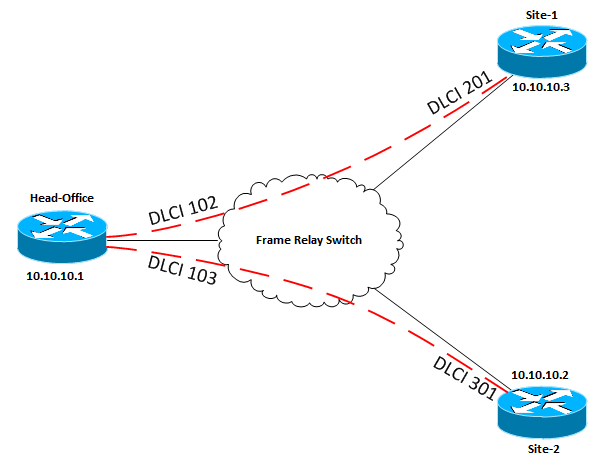 You can see that there’s now only one connection between, the corporate router and the Frame Relay switch. That saves some major cash.

Now you need to add seven remote sites to the corporate office and you have only one free serial port on your router, here frame relay will save you.

You should remember one thing, frame relay used to save money, not to make a network stronger.

The basic purpose of PPP is to transport Layer 3 packets across a Data’ Link layer point-to-point link, and its nonproprietary. 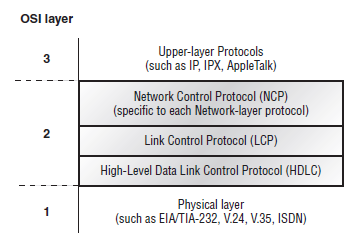 HDLC A method for encapsulating datagrams over serial links.

LCP A method of establishing, configuring, maintaining, and terminating the Point-to-point connection. It also provides features such as authentication.

The PPP protocol stack is specified at the Physical and Data Link layers only.

ATM was designed to be a high-speed communications protocol that doesn’t depend on any specific LAN topology. It uses a high-speed cell switching technology that can handle data as well as real-time voice and video. The ATM protocol breaks up transmitted data into 53-byte cells. A cell is a packet or frame.

ATM is designed to switch these small cells through an ATM network very quickly. It does this by setting up a virtual connection between the source and destination nodes.

Data rates are scalable and start as low as 1.5Mbps, with speeds of 25Mbps, 51Mbps, 10 0Mbps, 155Mbps, and higher. The common speeds of ATM networks today are 51.84Mbps and 155.52Mbps; both of them can be used over either copper or fiber-optic cabling.

It is a mechanism for routing traffic within a telecommunications network, as data travels from one network node to the next.