For example, if we need to apply add operation on two variables, the result will vary based on the fact whether the value of both the variables is numeric or textual.

To handle this situation data types are used.

Let us see what exactly we mean by data types

Datatype mentions the type of value assigned to a variable.

In JavaScript, the type is not defined during variable declaration. Instead, it is determined at run-time based on the value it is initialized with.

Hence JavaScript language is a loosely-typed or dynamically-typed language.

We can have the same variable of different types in JavaScript code based on the value that is assigned to it.

Primitive type: The data is said to be primitive if it contains an individual value.

Non-primitive type: The data is said to be non-primitive if it is a collection of multiple values.

To store a variable that holds a numeric value, the primitive data type number is used.

Constant of type number can be declared like this:

In Javascript, any other value except for the type of values mentioned above is not a legal number. Such values are represented as NaN (not-a-number).

When a variable is used to store textual value, primitive data type string is used.

string values are written in quotes, single or double.

Single quotes or double quotes have no special semantics over the other. Though you have to be strategic in the selection between the two when you have to use one string within the other.

This will be interpreted as bookofnetwork's and bookofnetwork‘s respectively. But, if you use same quotes for both the strings:

It is a syntax error.

Thus, remember, when you have to write string within a string, use different quotes for both.

The first character exists at index 0, next at index 1, and so on.

When a variable is used to store a logical value that can be only true or false at all the times, primitive data type boolean is used.

boolean is a data type used to represent only 2 values. 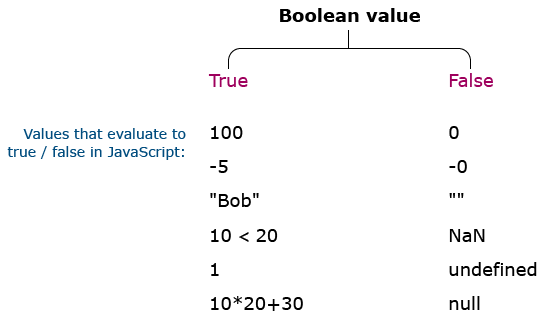